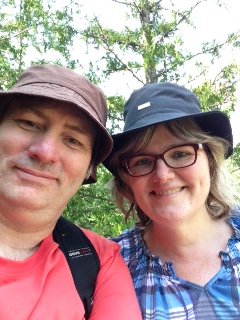 Jim Knight grew up near Owen Sound, Ontario on a dairy farm. He came to faith in Christ in his teens and soon after experienced a call to Christian ministry. He began his training at Emmanuel Bible College (B.Th.), where he met his future wife, Sherri. After graduation from E.B.C., Jim and Sherri got married and both went on to study at the University of Waterloo (BA). After living in K-W, they moved to London so that Sherri could earn her teaching degree at Western. During that time Jim worked with Mission Services of London in one of their homeless shelters and found it to be a challenging and eye-opening experience. Then, they made the big move to Toronto where Jim attended Tyndale Seminary and earned an MDiv degree. Donway Baptist Church immediately became their church home when they moved to Toronto. It has become an important spiritual home for their family. During Seminary, Jim spent his summers working at various jobs, but his most memorable was at House of Compassion, a ministry for homeless people that was started by Yorkminster Baptist Church.

Jim’s studies at Seminary sparked in him a deep interest in the New Testament and Biblical Greek, so he decided to continue his education at the Toronto School of Theology where he pursued doctoral studies. Graduate school was both challenging and invigorating for Jim. As he worked on his degree, he raised his children and was involved at Donway. He also began to work at Tyndale Seminary as an adjunct instructor. One of his great joys has been teaching Biblical Greek every summer. These many years later, Jim continues to teach at Tyndale and pick up his unfinished dissertation whenever he gets an opportunity.

Sensing a renewed call to congregational ministry, Jim offered to step in as Donway’s interim pastor this past fall when their previous minister moved on to another church. He found this to be an enriching and energizing time in his life so when the church approached him to stay on as their pastor,he was overjoyed.

Jim has been married to Sherri for 29 wonderful years. They have three children (Evan, Anya,and Ethan) and a dog (Tucker). Jim loves reading, listening to music, cooking and walking/hiking. The picture that accompanies this was taken when Jim and Sherri were hiking in the beautiful Rouge Valley in Scarborough.